As gendered human beings, our health behaviours, specific health risks, and the way that we engage with and are treated by healthcare systems is affected by our gender. This intersects with other factors such as race, class, and sexuality, to determine our susceptibility to different health problems and access to treatment.

Why gender and health?

At the Centre for Gender and Global Health we explore the different ways that gender interacts with, and influences, health outcomes. At the core of our work is the belief that it is through recognising the contribution that gender makes to health, and developing tailored public health interventions, that we have the best chance of improving health outcomes and achieving health equity for all. 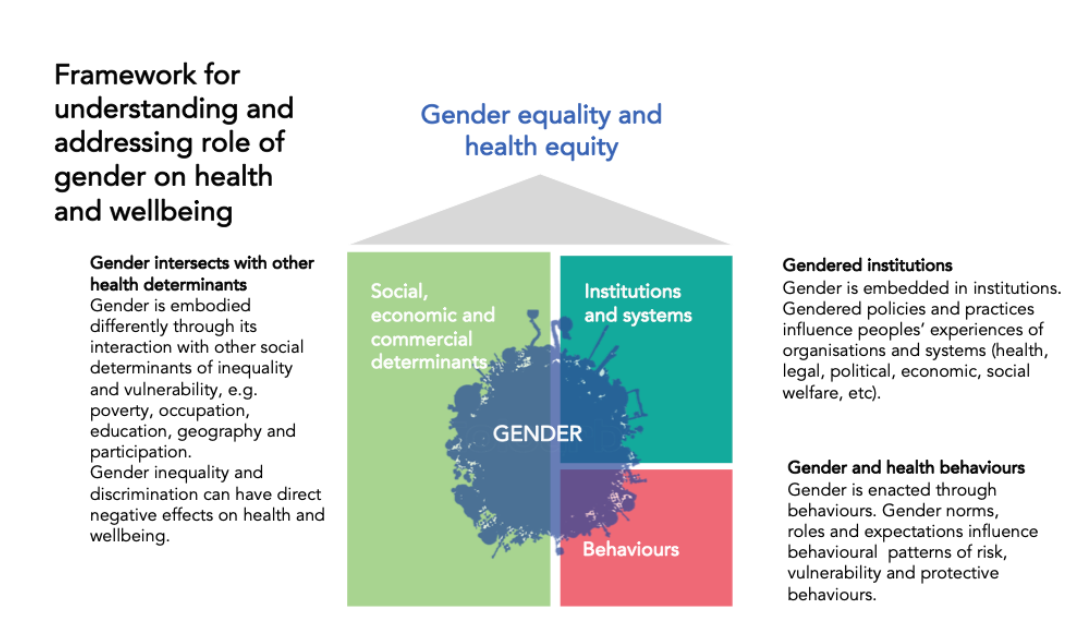 What does gender have to do with health?

Gender refers to something distinct from biological sex. It is not equivalent to women and girls, or men and boys, but encompasses people of all genders. It is socially constructed and influenced by laws, politics, policies, communities, families and individuals. It shapes how we behave, act and feel, the attitudes and expectations we have of ourselves and of others. Gender norms determine our positions and roles in society.
‍
Despite decades of research demonstrating the link between gender and health outcomes, global health players continue to do too little to address the very real impact of gender and its accompanying issues, such as power and politics, norms, access, vulnerability and violence, on people’s health.
‍
Past discussions of gender and health have often been equated to discussions of reproductive rights and biological differences. While evidently incredibly important, the implications of gender are wider than that: for reasons beyond sex, a baby girl born in 2017 can expect to live 4 years more than a baby boy born on the same day, while in some countries that life expectancy gap is 11.7 years or more. Men’s shorter life expectancies are driven, in part, by their higher rates of consumption of tobacco and alcohol, their likelihood of death from violence (including in peacetime), road injuries, and suicide, all of which occur at much higher rates than among women.
‍
Conversely, girls and women might live longer, but they suffer longer with chronic diseases. Pregnancy complications and unsafe abortions remain a significant cause of death in many settings, with one third of girls married before they are 18. Further, married women in 27 countries still require their husband’s consent before they can access contraceptives.

Gender never acts alone - therefore, to fully understand this link, an analysis of gender and health must encompass the multitude of factors which interact with gender to produce health outcomes. An intersectional approach to health acknowledges that while both are women, the life and health outcomes of a lesbian South African woman in Soweto is very different from that of a white American NGO CEO. While gender is an important determinant of health in its own right, it also interacts with other social, economic and commercial determinants such as race, poverty, education, and nutrition (see Figure 1).

Gender also impacts access to health services and the pathways of care within them. For example, women suffer more frequently and for longer with chronic pain than men, partly because their pain is disbelieved by healthcare providers. Finally, gendered behaviours and expectations shape exposure to unhealthy products, health protection behaviours and care seeking patterns. For example, the belief in the stoic man means that men worldwide are less likely to access health services for ailments. These complicated interactions require attention paid to the specific context of each case in order to fully understand what gender means and how, worldwide, it influences health.

Why has gender remained off the global health agenda for so long?

With stark gender inequalities within global health organisations themselves, perhaps it is unsurprising that policy has often been insensitive to this truth. The health workforce is, in some countries, up to 75% female - but men are 50% more likely to reach senior management, and gender parity in senior management is only achieved by 25% of 198 of the most active organisations in global health. Change appears to be coming, but it's difficult to tell how many organisations are going beyond words on paper to do the hard work needed to achieve gender equal leadership and develop programmes that both understand and address the crucial role gender plays in determining health outcomes.

In the Gender Centre, our diverse team think about this complicated intersection through many lenses. Our studies encompass papers ranging from the definition of women’s empowerment, the impact of sexual torture on Afghan refugee women and masculinities and homicide in Mexico to understanding how evidence on gender and health is used in policy making . To take a look at our publications, please check out the research and dissemination page http://www.ighgc.org/research. To find out more about gender and health, why not take a look at our introductory reading list below.

Gender refers to the socially constructed norms that impose and determine roles, relationships and positional power for all people across their lifetime. Gender interacts with sex, the biological and physical characteristics that define women, men and those with intersex identities.
‍
‍Gender equality in health means that all people have the right to realise their full potential to lead healthy lives, contribute to health development, and benefit from the results of this development.
‍
‍Gender equity in health means fairness in addressing the different health needs of people according to their gender. Inequitable health outcomes based on gender are both avoidable and unacceptable. A concept of fairness recognises that there are differences between the sexes and that resources must be allocated differentially to address unfair disparities.

For more definitions we suggest this glossary.

Next, read about What we do