Gender equality: why is the message not getting across to communities? 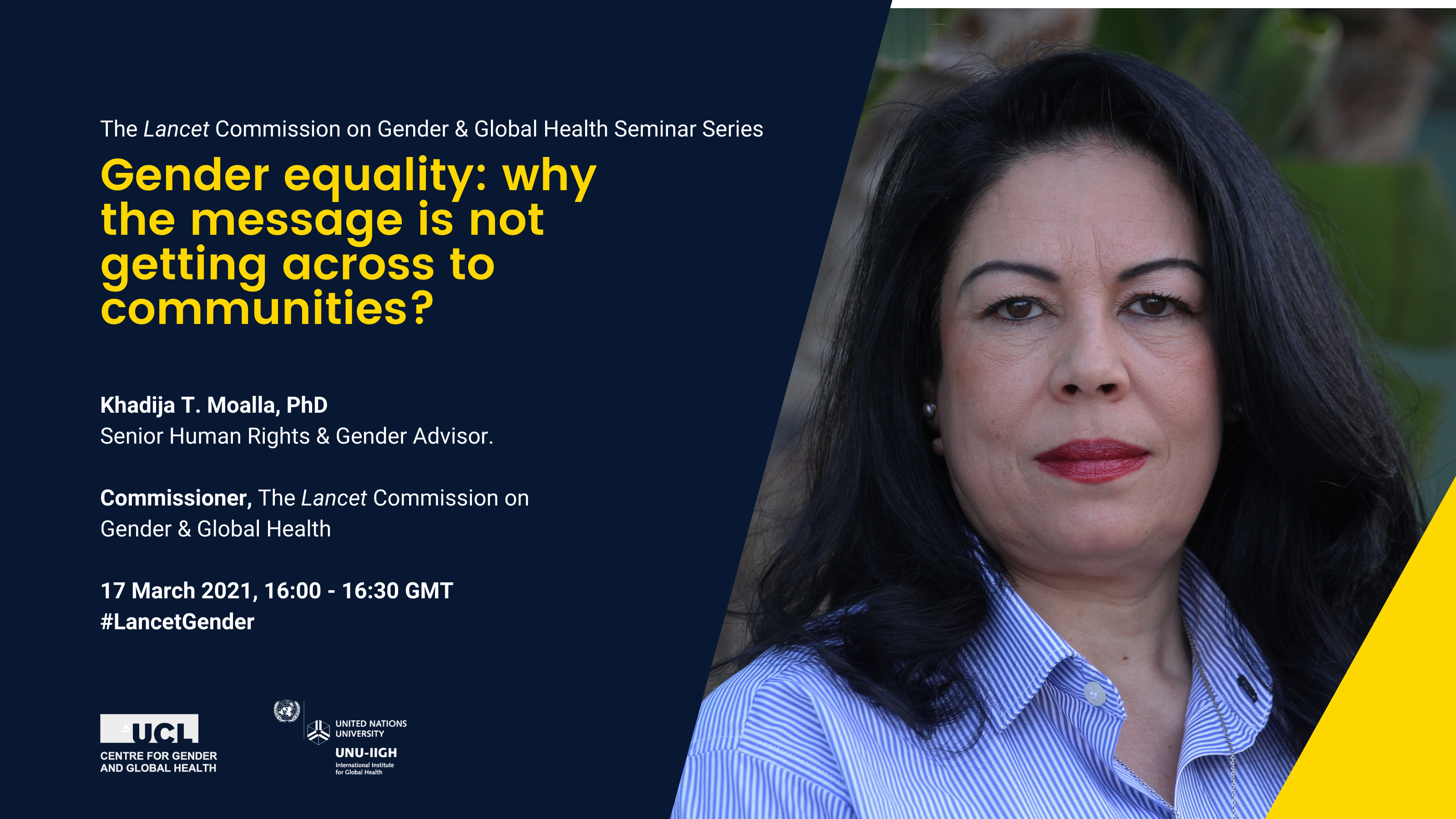 A recording of this event is available here.

The recently established Lancet Commission on Gender and Global Health is delighted to announce a new fortnightly seminar series open to all. The Series accompanies the development of the Commission, inviting Commissioners and Co-Chairs to discuss a key topic, question, or challenge that the Commission hopes to tackle. The series aims to involve a range of stakeholders and voices in its work and promote discussion and debate on gender and health.

In the fourth event of the series, we will hear from Commissioner Khadija T. Moalla, Senior Human Rights & Gender Advisor.

"When gender advocates speak or write about gender, they take it for granted that any audience will understand and accept their arguments in the same way they have been expressed. However, this is a wrong assumption that explains why many countries from the global South have their own frame of understanding that is based on their cultural, social norms and beliefs. Human rights and gender-based messages are not getting across. I will conclude by explaining the paradigm shift we need to collectively operate if we are serious about seeing real change in the lives of half of the humanity."

Details of the event

Join us from 16:00 - 16:30 GMT on Wednesday 17th March to hear from Khadija T. Moalla and to pose your own reflections and questions on this topic to the Commission.

The event is open to all but pre-registration is encouraged.

About the Lancet Commission on Gender and Global Health

In August 2020, a new Lancet Commission on Gender and Global Health was launched. The Commission, with three co-chairs and 25 commissions, has been set up with the explicit and uncompromising aim to move beyond the evidence to catalyse action on gender and global health. The Commission is being co-chaired by UCL Centre for Gender and Global Health Director, Sarah Hawkes; Director of the United Nations University International Institute for Global Health, Pascale Allotey; and Chair of the Kofi Annan Foundation and former Secretary General of the International Federation of Red Cross and Red Crescent Societies, Elhadj As Sy.

Find out more about The Lancet Commission on Gender and Global Health here. Further information on the Commissioners and Co-Chairs can be found here.