A book review of Dr Behnaz Hosseini’s ‘Trauma and the Rehabilitation of Trafficked Women’: Speaking suffering of conflict and gender-based traumas outside of peace and beyond humanity. 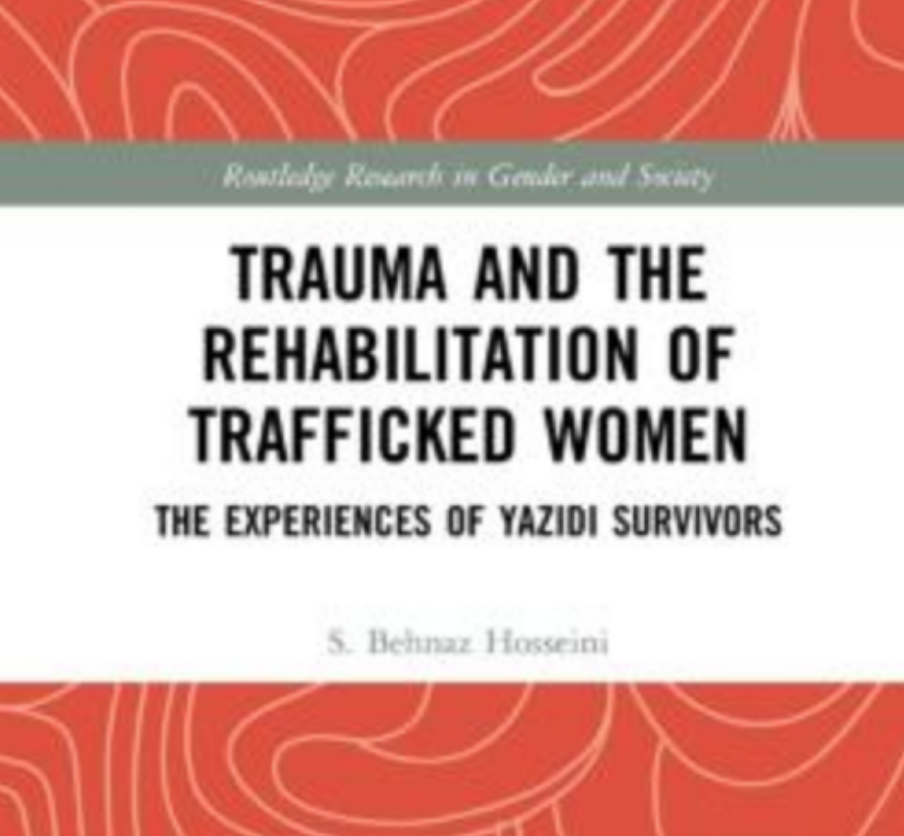 Dr Hosseini begins her book with the following message:

With such an opening, the reader is assured that the stories, that the words have been received and written in a way that symbolises such a book as a mode of resistance against the horrific atrocities of violence committed towards girls and women in conflicts throughout time and place.

Hosseini’s account of the targeted sexual violence towards Yazidi women is a powerful challenge and testament to the way we understand the identity of a victim. Such an understanding is crucial to enable to disentanglement of trauma with displacement. As Hosseini points out “many attempts have been made to help trafficked women, as a lot of international awareness has been raised on the occurrence of sexual slavery. But these women also need further assistance from national and international legal frameworks in expanding the capacity of structures to shelter women and to propose opportunities for them to make some kind of living” (p.4).

Furthermore,“these women have had to cope with heavy losses: they have lost their livelihoods, the anchors of their lives, and their home countries. In many cases, their cities and villages have been destroyed. All the things that made them feel safe are now gone. Their families and friends were left behind or killed, and their communities often reject them because of what ISIS did to them. They have no support, and it is often extremely difficult for them to trust people or rebuild emotional loss” (p. 4).

The analysis that Hosseini undertakes is to situate the violence of Yazidi women’s life-stories through a feminist and gender perspective of conflict and displacement. To do this, we understand gender-based analysis of slavery from ahistorical overview, and this is where Hosseini provides a unique vantage point into a snapshot of the lives of Yazidi women that the world otherwise viewed through the media’s reduction of persons to particular violent events.

Throughout Hosseini’s writing, we receive a compassionate transcending from violence through to survival, but she fights through her words to ensure that we, as the reader, do not romanticise the ways that Yazidi women are surviving, but rather, that the plight of Yazidi women is an act of “understanding empowerment is important in order to explore the experience of the survivor’s powerless situation, their reintegration process, and their maintaining of a normal life”(p.5).

The psychological exploration of the terrain that Yazidi women are finding their way through from unimaginable dehumanisation and de-centring of cultural identities in an attempt of eradication is built on through the concept of shelter. Hosseini undergoes very brave critiques to address the relationship between religion and trauma and the religious-shaped vulnerabilities and challenges that Yazidi women who are displaced from conflict are enduring. The legacy of belonging to a religious minority group is a potential for both a haunting of history as well as a source of spirituality to relieve the suffering of Yazidi women who are resettling in Germany, which is where much of Hosseini’s focus is on and the ways that Iraqi women in Germany have experienced a loss of social and cultural relationships.

The space of place is also illuminated as a point of significance for Yazidi women and why Iraq is considered as the home of Yazidi society. Earlier in the book, Hosseini reflects that the forced displacement of Yazidis from Iraq was intended to symbolise the end of the roots of this cultural community but through her analysis of Yazidi women resettling in Germany, she also shows how connections can be healed through the power of women’s life stories.

The intention of rape to destroy the lives and freedom of Yazidi women is a clear pillar of the violent landscape that has been endured. Hosseini applies the following to her systematic analysis of the confines of Yazidi women within the sexual violence perpetrated by ISIS. She writes “rape is used as a weapon against specific women in a community to maximise the effect that it has on that community” (p. 27).

Hosseini, however, never lets the words from the women of whom she writes for, escape even during the heavy analysis of religious fundamentalism that has betrothed Yazidi women historically and became a precursor to the 2014 genocide. Her research is an explanation of “truth narratives and determines why sharing truth narratives is important for women who have been hurt. It exemplifies that while telling stories is essential, high-quality listening is also necessary”(p. 47).

We are familiar, unfortunately, with the violent treatment of women in contexts of armed conflicts and war. What Hosseini’s outstanding work achieves is that the pain that is entrenched within the theoretical frameworks we instrumentalise and arrange to make sense of their suffering is the realities we must confront as researchers should we wish to try to reconstruct a sense of shelter from destruction and devastation for women survivors of conflict-related sexual violence.

The point about speaking truths and to provide “affectionate response to truth narratives” is poignant because these are ways, as Hosseini argues, to build peace. She says that “sympathetic listening takes the requirement to reply meaningfully to the realities of pain and embarrassment that emerge from women’s truth narratives seriously” (p.47). To achieve this, we must learn fromHosseini’s study that “examines the barriers to truth-telling and gender-specific communication in real attitudes that exist in some conflicts in societies” (p. 47).

Finally, a personal credit must be acknowledged to Dr Behnaz Hosseini who tirelessly and bravely fought for the stories of Yazidi women who were trafficked in the act of conflict through the name of religion and violently displaced to be the modes of explanation to explore their reintegration and perceptions. Hosseini reflects that “some of the survivors are scared to tell their own story and their own truth” (p.116). To have gained the trust of her interviewees is no small feat and receiving such stories of suffering bears a shadow on the soul of the listener. She articulates that the “traumatization of trafficking victims takes place in a context of repetitive and unrelenting boundary violations, and the loss of agency, self-regulation, and social support”(p.107). There is a new knowledge of the depravity of acts to dehumanise on the basis of an identity as a Yazidi woman that is invaluable for our understanding of gender-based violence in armed conflict and rehabilitation from sexual trafficking. Through Hosseini’s particular understanding, the ways that we as researchers can learn to receive stories has an important opening and one where“there is a need to go beyond the simplified and homogenized view of refugee women as victims or survivors and men as perpetrators and violators. Relatedly, there is a need to understand that women and girls operate in spaces of relative power, which are sometimes undermined through gender-mainstreaming which assumes women to be victims” (p.177).

Hosseini concludes with reflecting on the future for Yazidi women who were trafficked inIraq, and where the rehabilitation process should be undergone; in the country they have been displaced to or within the lands that hold the graves of those persecuted for centuries. One of the main challenges that Hosseini identifies as part of her conclusion is that “for the peace process to be sustainable is the economic development of survivors…. Economic opportunities are considered an important mechanism to help to regain power by the survivors. Opening special education, economic and scientific centres, and providing a salary for more victims will provide women with the skills and opportunities needed in order to be able to lead independent lives. Opening special centres to treat psychological trauma and the provision of better health services inside the camps will provide women with the means necessary to reintegrate into society.Training courses about psychological trauma and treatment for psychology and assistance for refugees in obtaining employment and a source of income are desperately needed” (p. 193).

By these concluding words, Hosseini has demonstrated that she has more than listened to the stories of Yazidi women who have survived traumas beyond humanity; she has heard their words. Through ‘Trauma and the Rehabilitation ofTrafficked Women’ based on research in camps in Iraqi Kurdistan and among refugees in Germany we can certainly move towards a focus on what improving the lives of those speaking such stories can actually mean on a personal as well as theoretical level.

Biography: Dr. S. Behnaz Hosseini is a visiting research fellow at Centre for Studies in Religion & Society, University of Victoria in Canada as well as minority researcher, project coordinator, and conference organizer at the mobile cultures team affiliated with University of Vienna. She is an Honorary Fellow in the Centre for Research on Gender and Women at the University of Wisconsin College. She is also a Middle East media analyst with Persian media. Dr. Hosseini has conducted extensive research on minorities in the Middle East and has worked with theUnited Nations as an expert consultant on ISIS crimes against religious minorities in Iraq. Her most recent publications are "The Jewish Diaspora after 1945: A Study of Jewish Communities in the Middle East and NorthAfrica" (2020), "Temporary and Child Marriages in Iran andAfghanistan: Historical Perspectives and Contemporary Issues" (Springer2021), "Trauma and the Rehabilitation of Trafficked Women: The Experiences of Yazidi Survivors" (2020), and "Yarsan of Iran: Socio-Political Changes and Migration" (Palgrave Macmillan 2020). An earlier publication is"Forced Migration of Iraqi Religious Minorities in Austria" (2018).Currently she is working on a project about the migration of Iranian religious minorities.

Dr Hosseini is also the author of ‘Women and Suicide in Iran: Law, Marriage, and Honour-Killing’ published by Routledge inSeptember 2021. https://www.routledge.com/Women-and-Suicide-in-Iran-Law-Marriage-and-Honour-Killing/Hosseini/p/book/9781032073347

Ayesha is a Senior Lecturer in Global Health. Her areas of specialisation are in culture, mental health, and trauma, focusing on humanitarian responses to gender based violence in conflict working in Afghanistan, Pakistan, South Africa and the Middle East. She is currently a co-researcher on a UCL funded project on 'Investigating trauma therapeutic interventions using traditional story-telling in Afghanistan' and a consultant on a gender-based violence prevention project based in Mumbai, India. She also provides Expert Witness reports on refugee and asylum seeker immigration cases.