"As long as it still comes off as a cigarette ad, not a civil rights message” 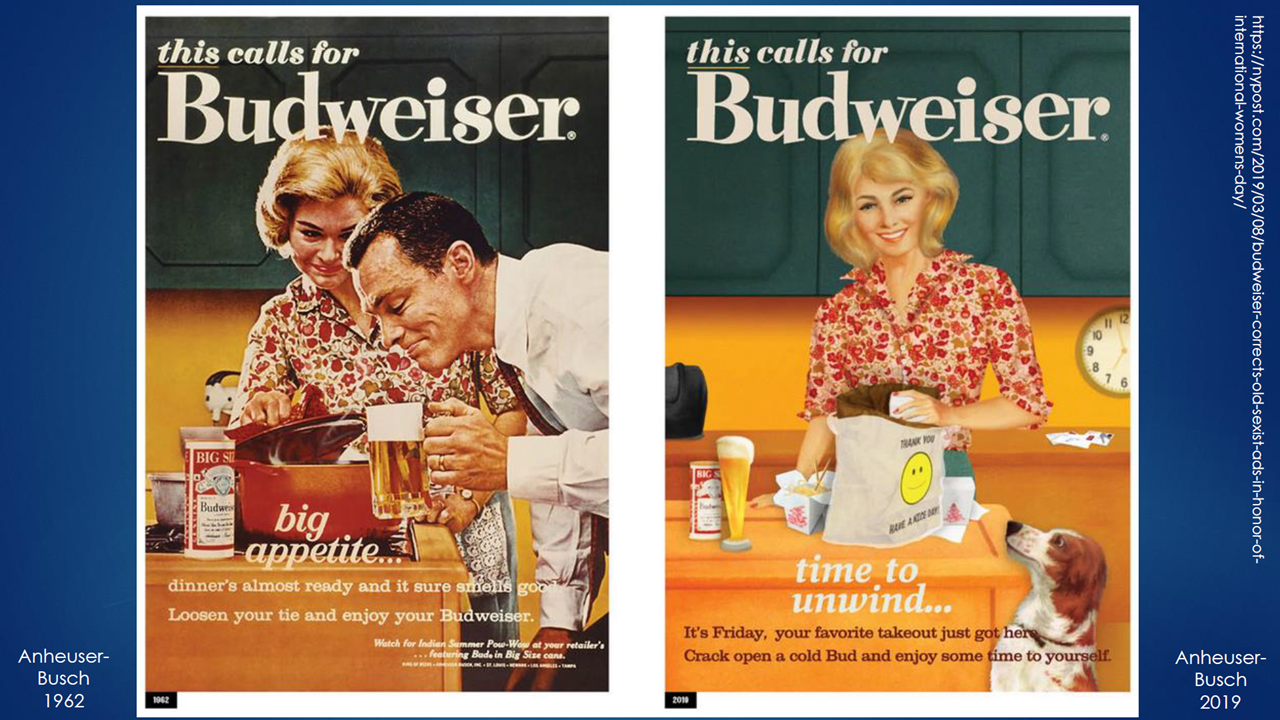 A recording of the event can be viewed here.

In the thirteenth seminar of the Lancet Commission on Gender and Global Health series, Commissioners Sarah Hill and Sharon Friel collaborated on a presentation based on their 2020 publication regarding alcohol and tobacco as commercial determinants of health. Hill currently serves as senior lecturer and Director of the Global Health Policy Unit at the University of Edinburgh, while Friel is a professor of health equity and Director of the Menzies Centre for Health Governance at the Australian National University’s School of Regulation and Global Governance (RegNet). The commissioners were joined by session facilitator and Co-Chair Sarah Hawkes, fellow commissioners, and a YouTube live stream audience.

Gender and the commercial determinants of health

Friel opened with a brief definition of the commercial determinants of health (CDoH), which focuses on “understanding the commercial forces, policies, practices, and products of the commercial sector, and how that affects health and health inequities”. She added that while much of the field revolves around the obvious and visible aspects of commercial forces, her work with Hill unpacks “some of the more indirect ways in which commercial actors and their ways of being” shape society, working conditions, expectations and norms, and policy as well as regulatory environments. She then handed over the presentation to Hill, who proceeded to draw connections between commercial determinants and gender through an analysis of how alcohol and tobacco companies target women.

Building on Friel’s introduction, Hill explained that a CDoH perspective allows for an exploration of the ways in which commercial actors influence the determinants of health at multiple levels, moving beyond individual consumption and exposure to consider their impact on structural determinants of ill-health and inequity. While the field has traditionally focused on industries whose products are directly harmful to health, such as tobacco and alcohol,  Hill noted that emerging work expands the idea of commercial determinants to consider a broader range of commercial actors and industries whose products might not always have a direct physical effect on health, but whose activities shape both physical and mental health in harmful ways nonetheless. While social and commercial determinants exert cross-cutting influence and are inextricably linked, the latter is distinguished by its focus on how commercial actors influence public and global policy “in ways that are often  hidden from view”.

With the basics established, Hill proceeded to bring in the gender aspect of this presentation by defining gender for the purposes of this session as “socially constructed differences between different groups”. Pausing to acknowledge that sex does play an important role in health, she positioned gender as the key analytical lens in this presentation as it permeates across different layers of social determinants, from intimate relationships to communal ties to social structures. Hill also emphasised the importance of an intersectional approach, stressing that “gender is just one aspect of social location and identity… that’s going to be shaped and modified by other aspects of social location” such as age, class, and race. Scaling up from micro- and meso-levels to the macro or structural further reveals how determinants of health are differently gendered to impact all gender groups – not just women and girls – in a variety of ways. This particular presentation, however, focused on “gender norms shaping women’s and girls’ exposure and vulnerability to adverse health experiences,” as illustrated by the case studies presented by Hill in the next section.

Evolutions in tobacco and alcohol advertisements

Drawing upon tobacco and alcohol advertisements targeted at women, Hill offered a historical account of how the traditionally male-centric tobacco industry identified women as a significant untapped market in the early 20th century, and subsequently “started putting a lot of effort into trying to recruit women as smokers,” with the alcohol industry following closely on its heels. These efforts included advertising campaigns which actively engaged with gender and gendered norms at the time, but a key finding of Hill and Friel’s work is that “the approaches used by those industries have changed over time… There’s a sense in which as gendered norms changed, particularly in high-income countries such as the United States, industries also changed their marketing strategies so that they were interacting with the fluid nature of those gendered norms”. This evolution in engagement has led to advertising campaigns such as Budweiser’s new take on an old concept, which allowed the company to perform progressiveness while still utilizing gender norms to their advantage.

This marketing pivot was particularly evident in the 1980s, when “there was a move towards engaging with ideas of women’s empowerment and liberation in advertising,” a highly visible way for companies to present themselves as progressive actors solely for the purpose of financial gain, not social change. Following a legal case in the late 1990s, internal tobacco industry documents were made publicly available and offered indisputable evidence which made it “very, very clear that they were playing on these changing norms in order to market their products”. A particularly damning example presented by Hill highlighted a Virginia Slims advertisement placed in Ebony magazine, which caters primarily to an African-American audience. Internal documents reveal the motivations and considerations behind this campaign, summarised in a flippant line that would go on to serve as the title of Hill and Friel’s paper: “As long as it still comes off as a cigarette ad, not a civil rights message”.

This perfectly encapsulates the “corporate cynicism” that hides beneath the veneer of these companies’ progressive advertisements and activities even today, as they continue to “launch campaigns that are not presented as advertising but are clearly intended to associate their brands with ideas of progress”. These marketing efforts have been largely successful, with women in high-income countries smoking nearly as much as their male counterparts, but Hill cautioned that women in emerging economies are now vulnerable to the pressures of these industries constantly on the lookout for their next potential market. Flashy partnerships forged in the name of empowering women are merely a means to an end, promoting corporate brands while advocating women’s transition into economically independent customers who then “become consumers in their own right”.

From the visible to the invisible

Digging deeper, Hill moved from the visible activities of these industries in advertising and corporate social responsibility (CSR) campaigns to their hidden impacts on the structural determinants of health, arguing that their pervasive influence in public and private policy works to reinforce gender inequities embedded within the global free market system. Hill observed that “a market society tends to operate in ways that systematically disadvantage women,” and it is precisely this “market privilege” which alcohol and tobacco companies work to reinforce by preventing market regulation and actively expanding their activities in emerging markets. This allows them to wield significant influence over not just market economies, but also labor markets where women are over-represented in low-paid and casual employment and under-represented in positions of political and economic influence. At the same time, reduced state capacity in market-oriented societies undermines provision of essential services such as education, health and social care in ways that leave girls and women particularly vulnerable.

Drawing her presentation to a close, Hill stressed the need to keep in mind that while these “sophisticated advertising and CSR campaigns” are the most visible activities of commercial actors, “at the same time there’s a whole lot of activities happening behind the scenes that are less visible but that are also very pervasive and important in terms of their impacts”. For industries, the visible and the hidden work in tandem “in ways that reinforce market privilege, that undermine regulation of their activities, and that… [contribute] to structural inequities that are really important in understanding women, women’s health, and the health of other gender identities,” ultimately increasing gender inequities across the social determinants of health. It is absolutely vital that those within the realm of public health continue monitoring the activities of these industries and raise awareness of the extent to which these industry practices negatively influence both health and gender equity, but Hill also urged researchers to consider what kinds of evidence are needed “to better inform efforts to resist the adverse impacts of these commercial determinants on gender equity and health,” pointing out that such industries engage with and manipulate ideas of masculinity just as much as they do ideas of femininity, “in ways that are also problematic and harmful to men and boys”.

To conclude, both commissioners offered some reflections and suggestions for the commission. Harkening back to her earlier call for an intersectional approach, Hill underscored the need for “more evidence about the kind of structural impacts” these industries have on various gender groups, labor markets, and economic resources, particularly as multinational companies move into low-and-middle-income settings in search of new markets. She also emphasised the need for a better understanding of how policy makers, advocates, and communities can “look to find alternative ways of engaging with gender in ways that don’t reinforce a very neoliberal economic paradigm, but that shift our understanding of gender and gender norms away from one of individual identity to a more collective understanding”.

Speaking more broadly about commercial determinants, Friel commended Hill for “a compelling argument for why we have to pay attention to these commercial forces” when it comes to understanding differential health outcomes across gender, and noted that the commission has the potential to significantly advance the field of commercial determinants by focusing not just on products, but “how commercial forces structure society and what that means for health”, paying due attention to the institutional, instrumental, discursive, and ideational power these industries wield to not just shape policy and regulatory environments, but structure society as a whole. In closing, she expressed her hope that the Lancet commission will “shine a very important light on these commercial forces as a major, major driver of the differential health outcomes that we’re seeing globally”.

The views expressed in this post are those of the presenters and author and may not reflect those of UNU-IIGH or the UCL Centre for Gender and Global Health.