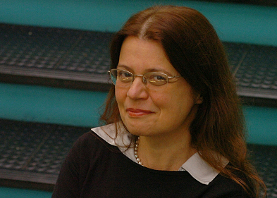 ‍This blog accompanies the Lancet Commission on Gender and Global Health seminar series. The series accompanies the development of the Commission, inviting Commissioners and Co-Chairs to discuss a key topic, question, or challenge that the Commission hopes to tackle. The series aims to involve a range of stakeholders and voices in its work and to promote discussion and debate on gender and health. The event can be viewed here.

The eighth seminar in the Lancet Commission on Gender and Global Health series was given by Simone Diniz, Professor of the Department of Health and Life Cycles, and deputy director of the School of Public Health, University of São Paulo. Her seminar focused on maternal rights, gender essentialism and how women have struggled to change obstetric practices. Simone was joined by fellow Commissioners, the Co-Chairs and a public audience joining via YouTube live stream, to discuss gender and maternal health.

Diniz began by explaining the nuances of Brazil’s public health culture. The concept of ‘Collective Health’ is used in Brazil as an umbrella term for Public Health, Epidemiology, Preventative Medicine, Social Medicine, Community Health, Social Sciences in health and more. This means that discussions around public health form a hybrid dialogue, with interdisciplinary terminology, and, as Diniz relayed, ‘nothing is merely technical’ (ABRASCO, 1994); when the discussion turns to maternal health, the discourse operates in the terminology of gender essentialism.

Before delving further into the seminar, Diniz defined and deconstructed the term ‘gender’ and what ‘womanhood’ meant in the context of this presentation. She highlighted the rich diversity of social translations of the so-called ‘natural’, from traditional biological narratives to more diverse recognition of sexuality, parenthood, and who falls under the category of ‘womanhood’. Diniz emphasised that there exists two particular essentialist viewpoints. One takes the guise of what Diniz termed ‘Mother Nature essentialism’ which is the idea that women were born to be mothers and have instinctual competence and knowledge of womanhood and motherhood. This thinking acts as a counter-hegemonic version of essentialism and is evident in many religious, “hippie” and naturalist communities. A second, and more dominant, hegemonic version of essentialism, Diniz explained as the essentialist ‘biological tragedy of womanhood’, which views women as incompetent, defective and dependent, feeding misogynistic medical attitudes and discourse by taking a correctional approach to women’s bodies. In both cases, Diniz emphasised the limitations of such essentialist viewpoints and iterated that moving forward policies and discussions should include a broader diversity of women’s experiences, including (but not limited to) trans rights, PoC and indigenous populations and differing forms of feminism. In this seminar, Diniz demonstrated how we should reconfigure essentialist thinking, using the example of younger feminist groups working to recapture ideas of a public health feminist agenda created in the 1980s, incorporating ideas of integrality (‘integralidade’) and comprehensiveness.

Evidence vs Practice: The Case Study of Mari

The seminar then turned to an exploration of gender-blindness in indicators for designing and implementing research and clinical records. Diniz pointed out the profound contradictions between evidence and practice, and the ensuing refusal to change by institutions; there exists a overestimation of the risks and discomforts of physiological birth, together with an overestimation of the benefits and an underestimation of the risks of surgical interventions. This creates a blind spot in indicators which ignores the “pessimization” of women’s experiences, and of potential iatrogenic harms in childbirth. All of this feeds into the narrative that women’s bodies are defective and benefit from routine correction. Diniz used the case study of Mari, a real and public story, to clearly present this disparity between evidence and practice.

Mari is a black woman in her twenties,  pregnant with her second child, who attends a training hospital of a famous university. In childbirth, Mari is assisted by several unidentified trainees and is given two episiotomies (that is, two surgical incisions of several  vaginal muscles and erectile tissue, usually done by a trained midwife or obstetrician). Diniz explained that Mari’s case highlights the way in which Brazilian training hospitals use poor patients for training purposes regardless of the medical need for intervention, and provided an example of her own experience: the first time suturing a patient in medical education used to be in the vagina of a poor woman. Mari understands she has been used to provide two surgical training opportunities (incision and suturing), and, believing this to be unacceptable, makes a formal complaint to the ‘Ministerio Publico’ for obstetric violence.

So, why did Mari have an episiotomy (two, indeed)?

‘The passage of the fetus through the vulvo-perineal ring will rarely be possible without harming the integrity of the maternal tissues, with the most varied lacerations and tears, conditioning the irreversible laxity of the pelvic floor (...). Episiotomy is virtually indispensable in primiparturients, and in multiparous in which it was previously practiced’ Rezende 1998: 337

Diniz presented this quote from a medical textbook she studied, to demonstrate the ways in which irrational practices in childbirth are embedded in medical culture. Going beyond this, Diniz suggested that male sexual terrors are often treated as ‘science’ and birth is viewed as ‘inverted rape’, with the baby as a phalus competing with the one of the father. She shared the example of ‘the husband stitch’ where postpartum women are given an additional surgical stitch to make them appear ‘virginal’ again. Women’s struggles to challenge practices in childbirth and fight against violence in healthcare is an old one.

Diniz provided the audience with examples of innovation, such as the Cochrane Collaboration which started to build a systematic appraisal of evidence-based care in the area of perinatal epidemiology, created the methodology of systematic reviews, and was important internationally in rights-based discourse. Books such as ‘A guide to effective care in pregnancy and childbirth’ were written for women in language not designed only for medical providers; these books became a source of strength for local movements to fight for change in healthcare. Social movements, such as in the UK in the 1980s, pushed these innovations in the fight against routine episiotomies. Indeed, Diniz highlighted two clinical trials about episiotomy in 1981, and went on to explain that by the end of the decade there were routine systematic reviews. Diniz also paid tribute to Murray Enkin, a Canadian activist, who helped to established midwifery as a recognised profession in Canada, and to promote evidence-based care in clinical environments. This shift towards evidence-based discourse and informed consent in childbirth aligned the idea of women’s rights with humanised care and a redefinition of ‘nature’. Thus, Mari’s formal complaint of obstetric violence, for having an non-consensual, obsolete and potentially harmful intervention, was a result of decades of activism.

Looking to the future, Diniz called attention to local initiatives such as REHUNA (the network for the humanisation of childbirth) working to create new indicators and diplomatic names, such as international ‘mother-baby friendly’ initiatives. These initiatives have a strong understanding of the dehumanisation of childbirth in Brazil, with evidence to explain why so many caesarean sections take place; birth has been seen as an experience of violence.  Diniz stressed the ‘hidden agenda’ of healthcare training, and implored future professionals to teach not only techniques but also values, working against the commonplace attitude of a ‘training vagina’, which views poor and black women in public services as training material, instead of valuing their human condition. Indeed, Diniz went on to explain, the presence of trainees themselves is not the problem but the lack of clear protocols and supervision is; heads of hospitals must resolve these issues in training programmes.

Currently, there exist social movements, such as Public Hearings, discussing the issue which has facilitated agreements about changing practice and forming a new list of indicators such as: episiotomy, companionship, choice of birth position, and right to choice of place of birth. Diniz pointed out that some of these indicators are more objective and some are dependent on ‘third layer indicators’. These ‘third layer indicators’ encompass gender-blind spots in indicators, such as fundal pressure, false information about the safety of the baby, and right to informed choice and refusal. Diniz suggested that new changes in practice are based on three key layers: live-birth certificate data; medical records; and those ‘third layer indicators’ which may be invisible to the current medical information systems.

Diniz explained that the narrative we have around childbirth is epistemically unjust, and that we have to create whole new narratives including rethinking the biology of childbirth. She told the audience that the case study of Mari, and Mari’s subsequent speaking up, shows subversive communication about choice, the epistemic power of a sense of injustice and the need to decolonise medical care. She asked: if we do not create the indicators that we need, who will?, and highlighted the importance of social movements in overcoming gender-blindness in health policies.

Implications for the Lancet Commission on Gender and Global Health

The seminar turned to the conflicts within the medical industry as a whole, and the subsequent challenges for global health. Diniz emphasised medical associations work with the idea of ‘too little too late’ interventions where care is not timely or sufficient, and also ‘too much too soon’ thinking which often results in over-medicalisation, for instance. The worst of both of these approaches can be seen in lower and middle income countries, and have an impact on short-term and longer-term health of mothers and babies, such as creating pressure on intensive care treatment, readmission to hospital, and ongoing chronic diseases and non-communicable diseases. The new narratives of the biology of childbirth - highlighting the health benefits of a more woman-friendly and physiological care - are an opportunity for a more “strategic essentialist” approach. Diniz asked how this over-medicalisation and over-diagnosis might become an issue for global health, and whether disinvestment can function as one source of innovation, by challenging the commercial determinants of health and disease. Diniz also posited that disinvestment might be necessary in order to create more gender friendly policies and opportunities.

To conclude, Diniz invited the audience to think of these issues in the form of comparative studies, to look at industry vs evidence, medical vs other, and question the medicalisation of women’s bodies as a source of income. Gender sits at the heart of many of these supposed dichotomies, and thus it will be essential for the Commission to challenge these conflicting interests in healthcare in its upcoming work.

Katia Smith works as Project Administrator for The Lancet Commission on Gender and Global Health, at the Centre for Gender and Global Health. She holds a MA in European Culture and Thought from UCL, and a BA in English Literature from the University of Cambridge. She has worked in research and administration previously, as well as with the Red Cross.