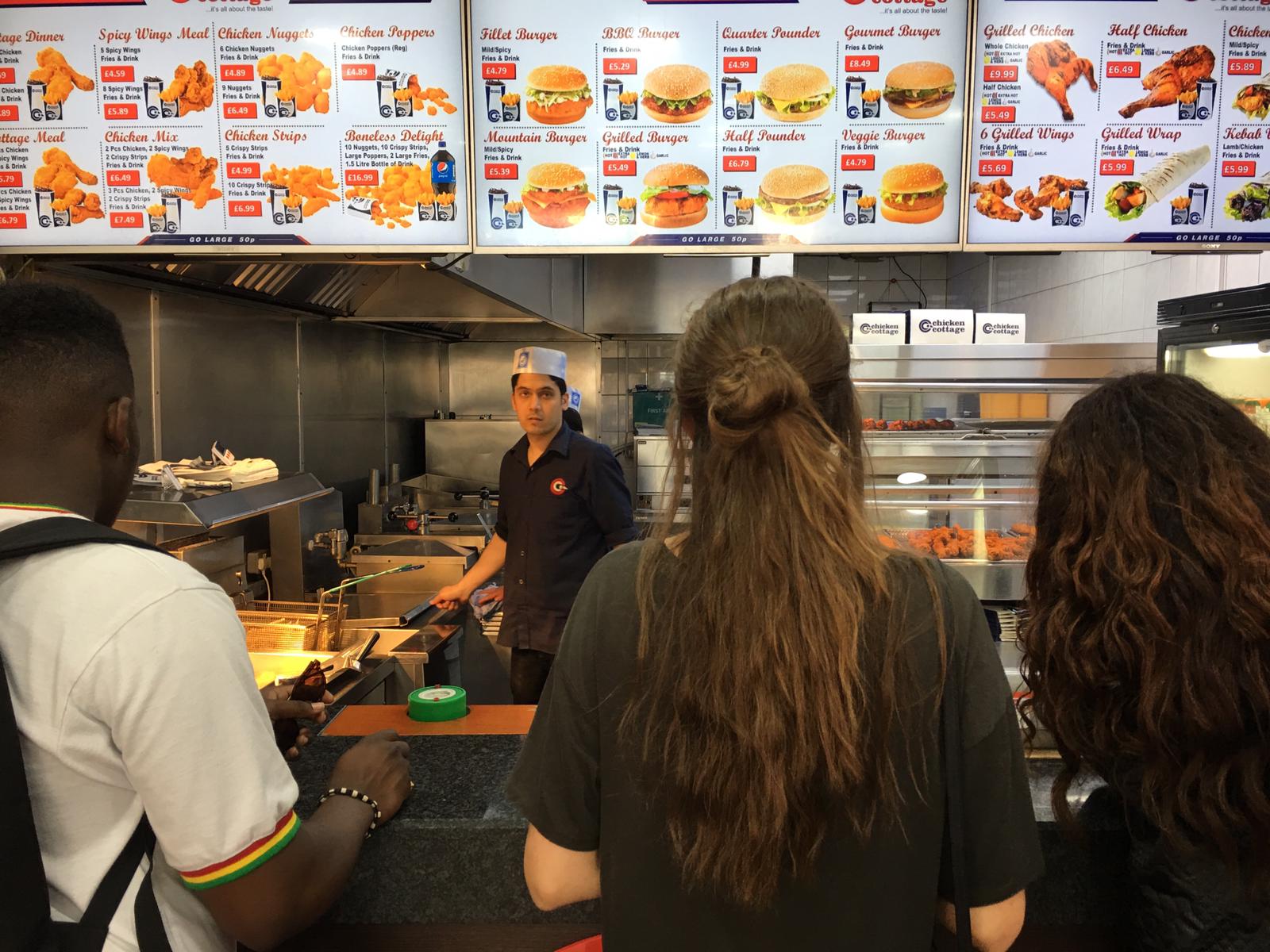 The streets I grew up in were lined with a category of outlet that outnumbered any other, by far. In fact, on one stretch of high street there were five variations of this shop, stood side by side.

As a fourteen-year-old I’d use these places to hang with my classmates after school; laugh with and learn from them, joke with the shop owner and receive occasional nuggets of life advice from girls in the year above, sitting at the adjacent table.

Its green tinged light and constant sizzle of hot wings, the encounters with ‘bossman’ and hours around greasy tables, paint such familiar scenes for me and many others living in inner city boroughs

The humble fried chicken shop. A fortress of post-school happenings.

Fast forward five years and I find myself sat in a seminar at medical school, tackling the health crisis that looms, wondering how preventative medicine can help reshape the bleak future of an obesity and life-style-related disease epidemic.

My mind flicks back to the endless afternoons spent in the fried chicken shop. Be it an independent outlet or part of a larger chain. Perhaps PFC (Perfect Fried Chicken) or HFC (Halal Fried Chicken) or even KHF (non-abbreviated form remains unknown). And for the first time I’m questioning, I mean really dissecting, why we all ended up in there.

We were there because the food was cheap, yes.

We were there because we could be boisterous dressed in our blazers and clip on ties, yes.

We were there because hot chips drenched in three types of luminous sauce were delicious, yes.

We were there because, well, they were there (One statistic stated that there are 42 fast food outlets per secondary school in Tower Hamlets, the borough I grew up in).

But it dawned on me that there was something at the root of all this, meaning our local fried chicken shops were much more than their fried chicken.

Fundamentally, they provided a space.

Where other services had failed or simply ceased to exist, these fast food outlets were filling a void.

Where else could we go?

In an area where overcrowded homes were the norm, where gentrification was creeping up the main road, shop by shop, bringing with it all its nuanced trends and too-expensive prices, the places my friends and I could go, after school and before going home, were limited.

And so all too often, the fried chicken shops were where we’d be. ‍

Digging further into my memories of our after-school activities, I realised that our oblivion to the crucial service these chicken shops were providing, meant we had some false sense of choice.

Buying our three wings and chips for a pound, socialising with our friends and making decisions about how we spent our time away from school or home were all very independent activities. We were exercising our agency as developing young people.

But how much control or choice did we truly have?

Amongst other things, there were societal limitations, failures of local youth services, unsafe streets, a lack of safe social spaces and a housing crisis to blame for leading us blindly to these hubs.

These were spaces that were achieving so much in aiding our social development, yet simultaneously damaging our health by, what I see now as, the secondary service they provided; fast food. ‍

Did we really have any other choice back then? Local spaces we could sit talking for hours on a dreary afternoon with a pound in our pocket and an uncontainable energy for life?

And what about beyond the fried chicken shops, how much true choice do any of us have when it comes to the food that we consume?

As a starting point, we need to consider the intersections of sectors supposedly distinct from health if we are to take on what we are labelling as a ‘health emergency’.

Akashi Alam is a third year medical student studying in London. She grew up in Tower Hamlets in a dual heritage home. In 2018 she gave a talk titled ‘Why fried chicken shops are essential spaces for young people’ at TEDxLondon.