Who self-cares wins: a new approach to men and self-care 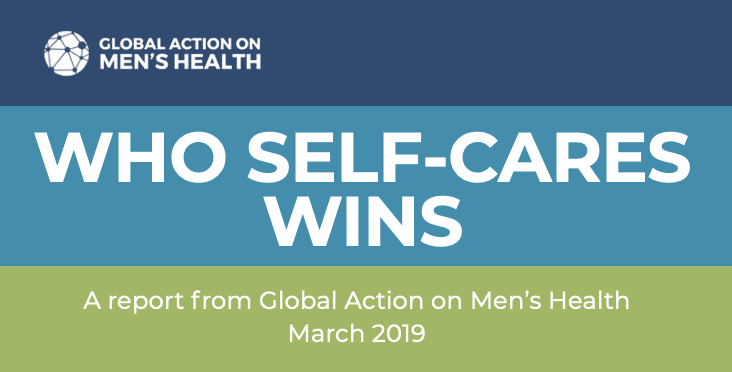 Peter Baker is the Director of Global Action on Men's Health

Men’s health has generally been overlooked in the self care field, especially from a global perspective. A new report from Global Action on Men’s Health, Who Self-Cares Wins: A global perspective on men and self-care, aims to fill that gap.

The report busts the myth that men are invariably self-destructive risk-takers – globally, most men do enough physical activity to benefit their health and do not smoke or drink alcohol – but also sets out very clearly where there is room for improvement.

In 2016, average global life expectancy for men lagged behind women’s by four years and there was not a single country where men lived longer than women. Genetics account for 1-2 years of the ‘sex gap’ and the remaining deficit is in large part due to men’s health practices, including risk-taking behaviours and under-use of services.

Around half of the sex difference in all-cause mortality in Europe is due to smoking and around one fifth is due to alcohol consumption. Globally, about 45% of male deaths are due to health behaviours, according to Institute for Health Metrics and Evaluation data.

An analysis of men’s health practices utilising the International Self-Care Foundation’s ‘Seven Pillars’ of self-care reveals the scale of the problem. Men generally have lower health literacy levels than women. Male mental health problems are under-diagnosed, because men are less likely to contact health services for help and often present their mental distress differently from women.

About a quarter of men globally are too sedentary with inactivity levels in men highest in the high-income countries. Men generally have less healthy diets than women with lower consumption of fruits, vegetables, nuts/seeds and whole grains. Adult men are more than five times more likely to smoke than adult women and well over a third of men drank alcohol compared to a quarter of women.

Men generally under-use health services. Studies from many countries show that men are less likely to seek help from primary healthcare services than women. Men in the UK are less likely to participate in NHS health checks designed to detect undiagnosed cardiovascular disease and diabetes or the risk factors for these conditions. They are also less likely to have an eye health check and, despite being at greater risk of bowel cancer, are less likely to take part in the screening programme.

The barriers to improving men’s self-care include male gender norms, a lack of policy focus on men, and health services that have been designed without men in mind. However, recent developments – including the UN’s Sustainable Development Goals, the adoption of a regional men’s health strategy by WHO Europe, the national men’s health policies in Australia, Brazil and Ireland, and an expanding evidence base about how to engage men effectively in health – provide a new opportunity to improve men’s self-care.

While it is clearly the responsibility of individual men to take care of their own health, strategies to improve men’s health cannot simply be based on exhortations to change chronic lifestyle practices that are rooted in gender norms and other social determinants of health. Who Self-Cares Wins argues that action on a multi-layered and systems-wide basis is needed to improve men’s self-care effectively.

Global Action on Men’s Health is therefore calling for:

1. Tougher tobacco, alcohol and sugar control measures. Men disproportionately use all of these products. They also eat more meat than women and could benefit from a tax on red and processed meat.

3. Establishing self-care as a strategic priority in public health policy and practice.

4. Recognition of the heterogeneity of men and a more intense focus on those communities of men with the worst health outcomes.

6. The involvement of men as active agents in self-care initiatives and building on the positive aspects of many men’s experience, knowledge, skills and attitudes to health and wellbeing

8. Health services that are more accessible to men, including community pharmacy services.

9. Better training in men’s health for health and related professionals.

10. Accelerated research into improving men’s engagement in self-care and better practical guidance for policymakers and practitioners.