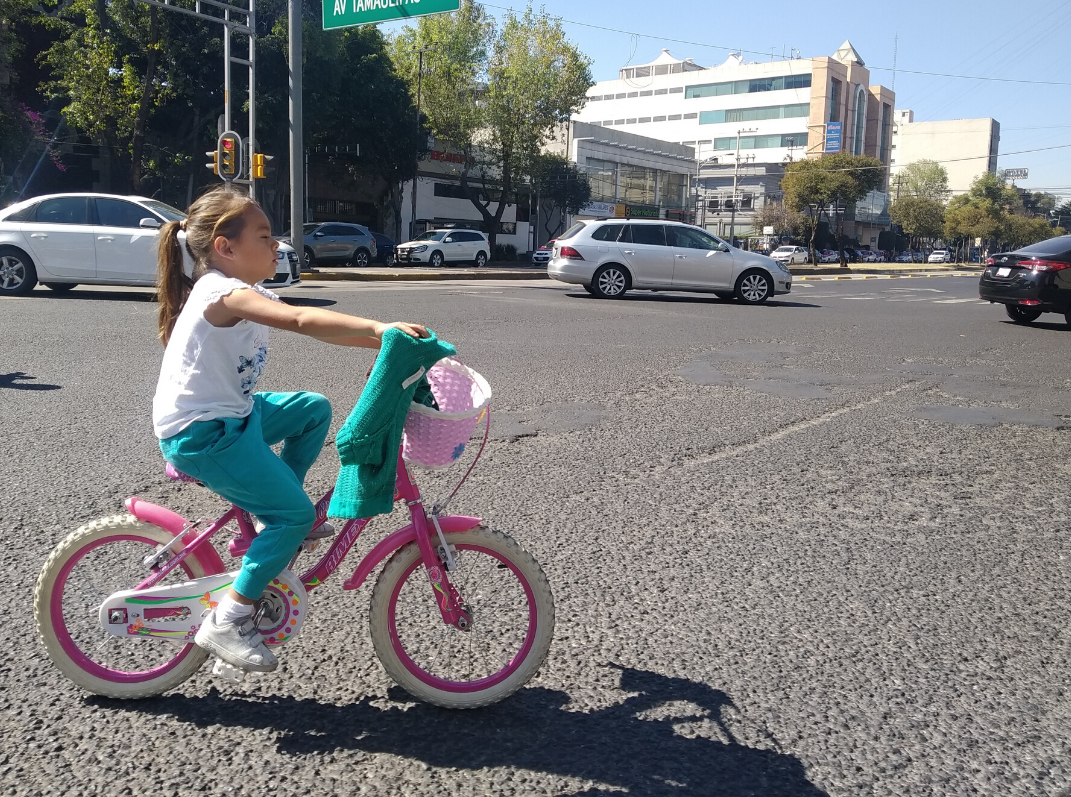 I’m Mexican and after being offered an amazing scholarship from the British government (Chevening), I moved to London to study my Master's. I organised my budget and decided to live within cycling-distance from UCL. Cycling every day in London alone, at any time, dressed the way I wanted, without fearing for my life and without being harassed, gave me a sense of freedom that I never expected that I would experience.

Violence against women and girls is a form of discrimination that constitutes a violation of their human rights. And yet sexual violence in public spaces, particularly sexual harassment, remains tolerated and normalized in most societies as a result of negative attitudes, discriminatory behaviours, inequality and gender stereotypes. Sexual violence against women and girls is a universal problem that occurs in both private space such as at work or in educational environments, as well as public space such as on the streets, on public transport, and in parks, public toilets and markets (1).

In Mexico, women and girls fear and suffer from various types of sexual violence in public spaces, from everyday injustices such as catcalling and molesting through to serious crimes such as rape and femicide. Mexican women grow up with a perception that they are in constant danger as they have been told that public spaces are unsafe for them (2). This reality limits women’s and girls’ freedom, including the freedom of mobility. For instance, in Mexico City (CDMX), 54% of women feel insecure using public transport (3).  To put it differently, the threat of sexual violence becomes a hurdle to women’s access to work and education opportunities, to participate fully in social life, to access essential services and to enjoy cultural or leisure activities. The reduced participation in these activities has a negative impact on women’s health and well-being (1).

In addition, CDMX faces multiple health challenges including air pollution, high rates of obesity, diabetes, cardiovascular diseases (CVD), and cancer (4; 5; 6; 7). These problems are complex and determined by the interaction of social, economic and political factors. Women are disproportionately more vulnerable. Promoting, integrating and enabling active transportation through every day cycling could offer a way of addressing previously named challenges with a common solution (8).

The Power of Active Transportation

Increasingly, there is a growing global recognition of the importance of adopting active transport within public policy as a solution that could address multiple challenges. The benefits of increasing cycling as a mode of transport include environmental benefits like reducing air pollution; social benefits such as reducing stress levels, noise, commute times; and health benefits by increasing physical activity and achieving the WHO recommended 150 minutes per week. This is especially important among CDMX women who are generally less physically active and have a higher obesity rate (76%) than men (69%) (5). Cycling could reduce their obesity risk and protect them against cardiovascular diseases as well as other morbidities and mortality.

However, several factors reduce women's participation in cycling worldwide. International based evidence classifies this into five categories: safety and risk perception, accessibility, environment factors, cultural context and personal factors (9; 10; 11; 12).  In CDMX cycling uptake is very low (1.4%) and has a marked gender gap, with only 22% of total bicycle trips being made by women (13). Nevertheless, women’s behaviour, attitudes and barriers for cycling as part of their daily routine in CDMX are still unknown and misunderstood. Women’s cycling barriers in CDMX are unclear because available literature is limited and is heavily based on assumptions and anecdotal evidence. No study has explored what influences Mexican women’s decisions and behaviour around cycling commuting.

Regarding the personal factors as barriers for cycling uptake among Mexicans, women are insecure regarding their physical abilities thus affecting their wiliness to cycle (2).  Subtle and constant narratives that see physical activity as connected with masculinity and ‘for men’, coupled with the notion that femininity is incompatible with strong women, may explain this finding. This conflation seems common and is intimately linked to the way girls and boys interact from childhood, reinforced by gender roles and stereotypes (16).

In a broader context, evidence suggests that women´s commute patterns are usually more complex than men, because social expectations of household and working roles differ (13; 12). CDMX women’s main travel purpose is transporting others and housework related (19%), going to work (16%) and going to school (11%). However, despite the fact that women’s labour-force participation is increasing, women still perform disproportionately more housework, conducting more than three-quarters of the housework and spend 3.4 more time at it than men (14).

Towards an Inclusive Mobility

CDMX’s first obstacle to achieving a comprehensive, efficient and inclusive mobility policy is the lack of long-term vision in the plan, policies and investments. The roots of the problem relate to the fact that the transportation policy has been subject to sharp breaks in continuity associated with governmental successions (15).

It is becoming increasingly urgent to explore the behaviours, perceptions and barriers experienced by women who wish to integrate cycling as part of their daily commute and there is a need generate the evidence of women’s response and attitude toward cycling. Cycling promotion should be part of a long-term, comprehensive and intersectoral policy, considering women’s travel patterns and addressing their needs. CDMX needs further research and the development of indicators and data to measure and evaluate health and economic impact, justifying the investment.

The invisibility of women’s cycling patterns is just the tip of the iceberg. Under which, the social construction, the expected women’s roles, sexism, and patriarchy coexist. In Mexico, as a result, the gender gap is still huge, women have small participation in the economy, and salary disparities, gender violence, and inequality still continue. With this research I realised that the challenge to improve the health of vulnerable groups is even bigger, we need to join efforts to modify the roots of gender inequality that impede development, economic growth, health and wellbeing.

Lesly Samara Vejar is a recent graduate in MSc Global Health and Development, from the University College London. Samara is from Mexico and she won a scholarship of the British government (Chevening) to pursue higher education in the United Kingdom. Her background is in nutrition, she had work in the Ministry of Health back home and recently she worked at the World Obesity Federation, based in London in health policy, specifically front-of-pack food labelling and city-level interventions. Samara is passionate about the transformation of cities and environments to promote health, prosperity, gender equality and sustainability. Samara currently works at the National Institute of Public Health in Mexico.