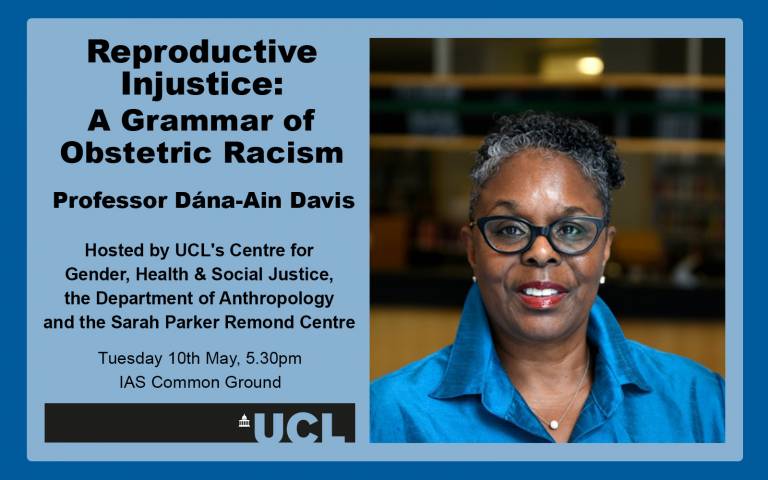 This event is organised by UCL's Centre for Gender, Health and Social Justice, the Department of Anthropology and the Sarah Parker Remond Centre.

In this talk, Professor Dána-Ain Davis charts the way two Black reproducing bodies are shaped by what she thinks of as a grammar of racism. In this thought piece, Davis shares the birthing experiences of two women and thinks through their medical encounters by  drawing on Hortense Spillers’ notion of grammar and Emily Martin’s idea of flexible bodies. She deploys both to consider how history degrades Black bodies; shaping them to serve as fodder for—in this case— medical mistreatment. The term grammar of racism is equivalent to the parts of racism that is manifest through two concepts—immunity and susceptibility.  Using historical examples of how black bodies sit on a continuum of immunity and susceptibility to illness and disease, Davis argues that the grammar of racism produces Black anti-bodies—those bodies weighed down by Black disposability, neglect, and medical abuse.

Professor Dána-Ain Davis received her PhD from the CUNY Graduate Center in anthropology in 2001. Before coming to Queens College in 2007, she was Assistant Professor of Anthropology and Coordinator of the Global Black Studies Program at SUNY/Purchase.

Davis’ areas of specialization include black studies, family and sexual violence, reproductive rights, poverty and welfare policy, and women’s studies. She has published the book Battered Black Women and Welfare Reform, as well as a number of articles on women and welfare policy. Davis has two books that will be out in 2013; Feminist Activist Ethnography co-edited with Christa Craven; and Black Genders and Sexuality, co-edited with Shaka McGlotten.  She is currently Co-Editor of Transforming Anthropology, the journal of the Association of Black Anthropologists. Davis has been co-Chair of NARAL-NY, served as President of the Association of Black Anthropologists, Executive Director of the ADCO Foundation.  She is a trustee of the New York Foundation, and as a consultant to a number of foundations and community-based organizations. New York Governor Cuomo appointed Davis to the Governor’s Maternal Mortality Taskforce in June 2018.