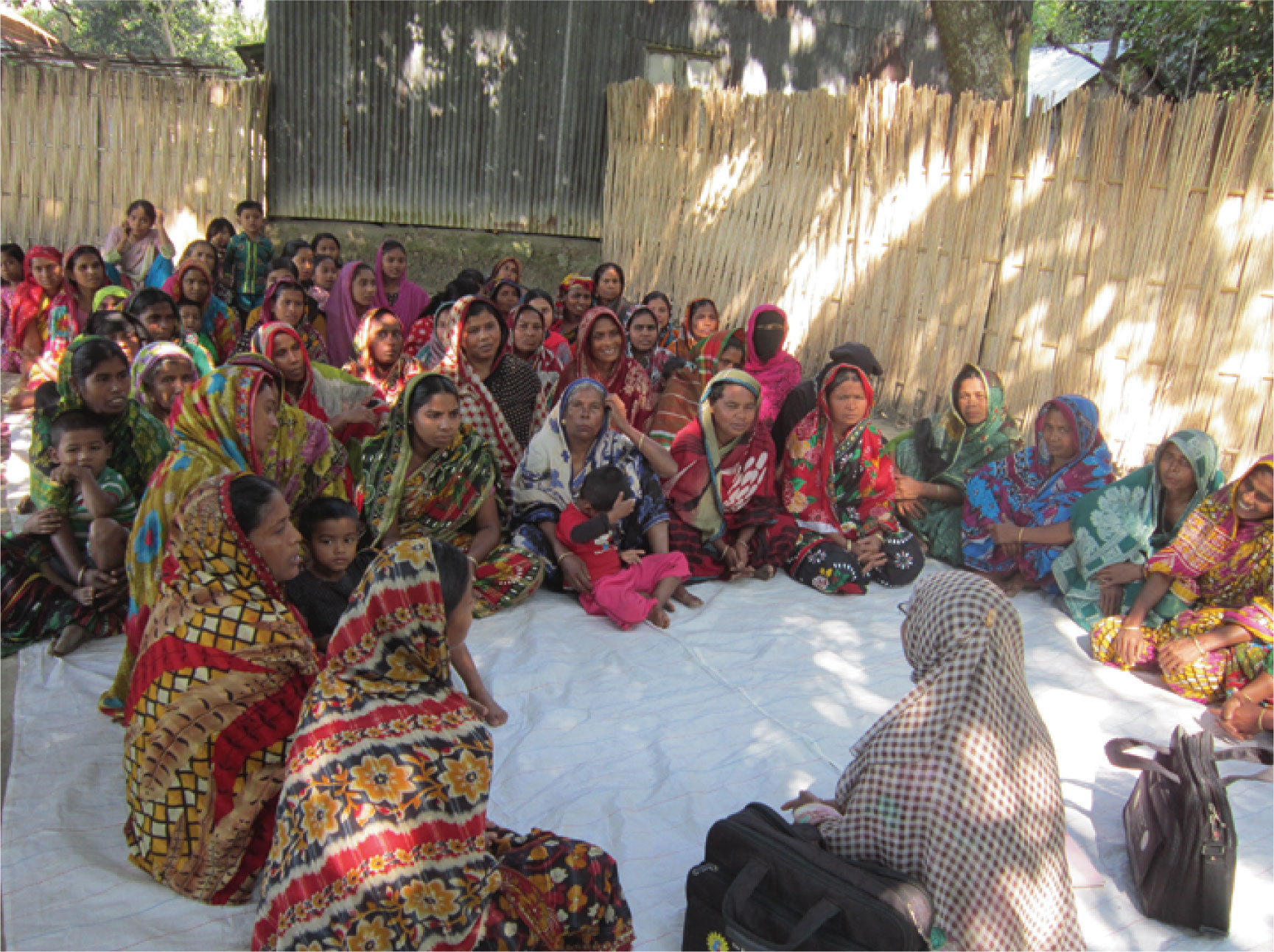 Like most people in Bangladesh, if you ask me what I like to eat, I love to eat rice, mashed potato and lentil dal.  We eat a large portion of rice with small portions of vegetables, bhorta (mashed vegetables), and fish or meat curry. We also enjoy eating sweet pitha (usually made of rice flour and sugar), vermicelli and rice pudding. These are delicious and loaded with sugar.

While for many, these diets are a thing of pleasure, they are not without consequence. Our food intake is a key driver of obesity, which in turn is a risk factor for developing diabetes, alongside low birth weight which is linked to a risk of diabetes and other chronic diseases in later life. In Bangladesh there are 8.4 million adults with diabetes (10% of the population) (1). According to the International Diabetes Federation, the prevalence will rise to 13% by 2030 (1).

People in rural areas, in particular, often lack information about balanced diets. The cost of vegetables are relatively high and availability is low. Information about how to grow vegetables using their own available resources is lacking. We decided to evaluate whether a participatory approach, which for many years the Diabetic Association of Bangladesh (BADAS) and UCL Institute for Global Health (UK) have been using in Bangladesh to improve maternal and newborn health (2), might have a role to play in overcoming some of these barriers to prevent and control the incidence of diabetes (3).

Faridpur is representative of much of Bangladesh – it is a rural area, where people farm jute and enjoy eating the kind of food I mentioned before. Most of the population follow Islam. Women’s movements outside of the home are restricted, and men and women do not comfortably occupy the same public space.

Because of these cultural norms, we set up separate men’s and women’s groups to work through a participatory learning and action cycle, learning about diabetes and identifying the barriers to diabetes prevention and control. Women’s and men’s groups joined together and conducted large community level meetings to plan and implement community actions. Many of these actions were about food.

A balanced diet with plenty of fruits and vegetables is recommended to prevent and control diabetes, but group members felt that the relatively high cost of vegetables and their lack of local availability prevented community members from eating recommended amounts. While women did the majority of the cooking, men usually did the shopping, and had to be relied upon to frequently buy vegetables. Men felt irritated with these new demands, and women felt unable to change their cooking and eating because they couldn’t access vegetables. To overcome these barriers, groups decided to encourage kitchen-gardening to improve access to vegetables. At a group discussion in her village Ms Taslima Begum told me: “Through the meeting I learned that I should eat more vegetables but buying more vegetables from the market is not possible. So, I have started growing them.”

Mr Shek Jamal goes to a men’s group in Faridpur, and he told me about the cost of increasing fruits and vegetable intake: “Four pieces of lemon cost 25-30 taka, one kilo guava cost same and how many people can afford that? Buying fruits and vegetables from the market is not always possible but if we grow our own then we can eat them whenever we want to.”

Other risk factors for diabetes are high fat-diet and saturated fat consumption (4). When I spoke to men and women about what made it difficult to change their fat and oil consumption, interestingly I found that men and women blamed each other – the men said that their wives were cooking with lots of oil, and the women said that their husbands would complain that food with less oil was not tasty. While there were benefits of having separate men’s and women’s groups (for example, women felt more comfortable speaking in public in women’s only groups, and men could meet in the evenings at times convenient to their working day), these comments indicated the importance of getting men and women together to change household cooking and eating. After the joint community meeting, I spoke to a group of women who told me: “Initially it was difficult to cook with less oil as my family found it tasteless but gradually, we got used to having less oil. My family wasn’t bothered about this change in cooking, because they had also attended the meeting.”

We evaluated our intervention through a cluster randomised controlled trial and found that ‘intervention areas where groups existed’ had reduced their diabetes burden by a dramatic 64% compared to villages which had not received the group intervention (5). We asked groups how they thought that this had been achieved, and they felt that their actions and awareness raising activities had been effective at changing behaviour. Men and women working separately and together had made simple changes that were allowed-for within their context to improve their diet (6).

When it comes to diets, assumptions are often made as to why people eat what they do and the ways they can be encouraged to eat better. But, in reality, communities themselves are often best placed to reveal these barriers and solutions.  I learned from our groups that participatory approaches can enable communities to challenge community norms about diet and eating at a pace that they feel comfortable with and in ways that are acceptable to them. Community engagement is necessary in the movement for healthier eating to tackle non communicable diseases like diabetes.

You can read more about the groups and our work here: (https://www.ucl.ac.uk/global-health/research/a-z/d-magic)

Kohenour Akter has been working as Process Evaluation Manager in Perinatal Care Project (PCP) of Diabetic Association of Bangladesh (BADAS) since 2014. Her areas of expertise are public health research, process evaluation, gender, violence against women, child rights and community mobilization. She has overseen several qualitative studies in collaboration with different teams and experts. She is an active member of different national and global organizations. She completed her Masters in Social Science from the University of Dhaka.